The iceberg lettuce variety called Evionas RZ Knox has good field standability, even under hot summers conditions, while Concretion RZ batavia lettuce variety is extremely dependable thanks to its complete package of Bremia resistances. With varieties like these, Rijk Zwaan offers growers and other fresh chain partners peace of mind in today’s challenging times. During the annual Pfälzer Feldtag in Schifferstadt on 8 September, Rijk Zwaan Germany presented a broad range of varieties, from lettuces to brassicas. “The organic sector is looking for less risky crops – in growing but also in promotion and price standability,” says David Pape, Account Manager Open Field Crops. 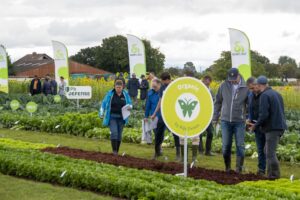 Inflation is creating uncertainty
On the other hand, the rising inflation is creating consumer uncertainty. “Higher prices are causing consumers to look for ways to save money, such as by buying cheaper groceries. Moreover, the higher costs are affecting growers too,” explains the account manager. “Also the ongoing critical situation of labour, finding people to work in the companies, causes immense big problems.” In these challenging times, growers are therefore turning to varieties that offer more security: ones with a comprehensive package of resistances, a reliable yield and good sales opportunities.

Visitors from across Europe
Varieties with precisely these kinds of characteristics were on display during Rijk Zwaan’s Open Field Day in Schifferstadt, which is situated in Germany’s key production region for open-field crops. The event was attended by hundreds of growers – of both organic and conventional crops – as well as dealers and retailers from all over Europe. They were able to learn more about the very latest inovations in lettuce, teenleaf, babyleaf spinach, kohlrabi, pointed cabbage and cauliflower. 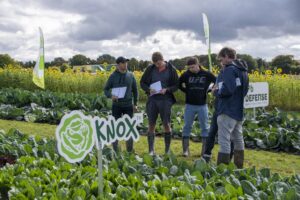 Iceberg Evionas RZ
According to Pape, the organic growers showed an interest in a number of varieties, including the iceberg lettuce Evionas RZ KnoxTM. “This is a medium-to-big-sized lettuce which has good field standability, even under hot summer conditions. Shape, weight, healthiness of the bottom and the Bremia package make this lettuce a reliable choice. It also has a longer shelf life because of the unique Knox trait which delays pinking along the cut edges. Organic seeds of Evionas will be available in 2023,” he says.

Cos Ralove RZ
Cos is another important lettuce type. “This lettuce is becoming increasingly popular in the organic sector because of its small size and long shelf life. Ralove RZ is a new cos variety with extensive resistances. This is a yellow-heart lettuce with strong, shiny green outer leaves. Organic seeds of this variety will be available in 2023. Ralove RZ is an ideal enlargement of the assortment besides Rawley RZ and Ralston RZ.”

Batavia Concretion RZ
Another appealing lettuce type for organic growers is Concretion RZ batavia variety. “This lettuce has slightly curled leaves and has a great taste. It is uniform and strong against tipburn, rot and bolting. It can be grown from spring to autumn and is very popular in Austria and Switzerland. It has also a full range of resistances.”

Pointed cabbage Tourima RZ
Besides the wide range of lettuce types, there were also numerous brassicas on display in Schifferstadt. In Pape’s view, even though Tourima RZ isn’t a new variety, it deserves a special mention because it is a good fit with organic production: “This pointed cabbage is a fast-growing, stress-tolerant variety that can be grown with low nitrogen and which has a smooth cabbage taste. There is strong market for Tourima RZ.”

Explore organic concepts at RZ Retail Center
On the topic of market opportunities, Pape emphasizes that retailers are looking for strong concepts in their organic category: “Organic has been an important growth driver in the market. At our Retail Center in Berlin, we facilitate tailor-made workshops and offer opportunities for shopper/consumer studies conducted by specialised researchers. Any chain partners who are interested can contact the Retail Center by sending an email to retailcenter@rijkzwaan.de.”