With organic produce currently accounting for just 1.5% of production in Flanders, three local farmers’ organisations have devised a plan to significantly increase this share. Koen T’Syen, organic specialist at Rijk Zwaan: “Closer collaboration in the value chain can achieve the most impact. Supermarket chain Colruyt’s project to sell locally grown organic melons is a great example of this. We can move a step closer to the targets by working together.”

The target of the European Union’s ‘Farm to Fork’ strategy is that at least 25% of the EU’s agricultural land should be used for organic farming by 2030. There are substantial differences between the share of organic production in different European member states and regions. Austria is leading the way and is already at 25%, while Malta brings up the rear with just 0.5%. Flanders – the Dutch-speaking region of Belgium – is towards the back of the pack too, with barely 1.5%. “Clearly, based on the current pace of development in Flanders, we will never achieve the 25% target,” admit the farmers’ organisations Bioforum, Boerenbond and Algemeen Boerensyndicaat (ABS).

Small family businesses
Rijk Zwaan’s Koen T’Syen is in full agreement. He has been working at the vegetable breeding company for 25 years, providing support and guidance to organic growers of both protected and open-field crops in Flanders. “The crops include lettuce, tomatoes, peppers, courgettes, cucumbers, leeks, carrots and all kinds of brassicas. Over the past 25 years, the share of organic vegetables has only increased from 0.9% to 1.1%. Organic growers are often small family businesses that don’t have a successor. Today’s high energy prices are making things worse. Besides that, in the case of open-field crops it takes two years to transition to organic production, which is costly. Therefore, some serious action is needed to stimulate organic farming in Flanders.” 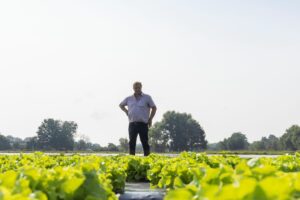 5 sub-targets of 5%
In that context, the three farmers’ organisations have developed an action plan in which the European target of 25% is broken down into five sub-targets for Flanders, each of 5% by 2027. The targets relate to the agricultural land, revenue growth of the collective animal products, number of organic companies, share of organic consumption and the organic share in governmental catering. The farmers’ organisations regard it as particularly important to increase the demand for organic products. “The existing primary organic sector is concerned that forced growth of organic production will cause a drop in prices,” states the plan. “That’s why it is clear to us that growth in organic production can only be achieved by driving demand for organic products.”

New campaign to stimulate demand
The farmers’ organisations identify stimulating demand for organic produce as the number-one action in order to accomplish the five sub-targets. Besides other promotional activities, in late April 2022 a three-year campaign was launched to build awareness among Flemish people of the benefits of organic produce. The theme is “Organics from Europe: always a good choice!” The campaign has been organised by Flanders’ Agricultural Marketing Board (VLAM), partly thanks to European funding. Similar campaigns are running in the Netherlands, Sweden and Finland.

Path to consumers
Another action mentioned by the farmers’ organisations is that it must be made easier for organic products to make their way from growers to consumers, including through the trade, processing, retail and food industry channels. Koen completely agrees with this conclusion: “The Flemish organic sector is fragmented. We have several different auctions, and some growers sell their products themselves. It would be beneficial to have more intensive collaboration within the value chain.”

Organic melons from local greenhouses
Rijk Zwaan tries to play a meaningful role in intensifying that collaboration, such as in the contact with grocery chains, since the retail channel is key to the success of organics according to Koen. He gives an example of such a partnership: “Supermarket chain Colruyt is striving to sell more organic fruit and vegetables and also to carry more locally grown produce. Colruyt approached us to ask whether we knew any local farms that could grow Charentais melons organically in the greenhouse. We put Colruyt in touch with the right growers. We could also advise them on the best melon varieties for organic production, because Rijk Zwaan offers an extensive range. That was a very constructive value chain partnership.” 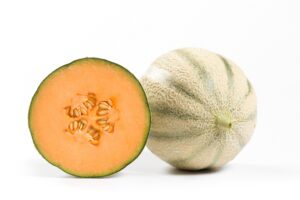 Improving organic production with robust varieties
Besides driving the demand and intensifying collaboration, the plan by the farmers’ organisations identifies other ways to clear a path for organics, including government stimulation, more attention paid to organics in education, and possibilities to further improve organic production. Koen explains how Rijk Zwaan is supporting the latter point: “In our breeding we are focused on developing robust varieties that perform well under stress and require less fertiliser. Additionally, we’re working on resistances against diseases and pests, such as aphids. Besides that, our KnoxTM lettuce varieties – which reduce pinking – are very popular with organic growers. That’s how we’re contributing to improvements in organic production, and hopefully also to the growth of the organic segment as a whole.”

Keen to know more? See below for more information about:

The organics campaign in Flanders (in Dutch)