The shift towards organic growing in Senegal

Vegetable growers in Senegal, West Africa, are becoming increasingly sustainable. Some growers have even switched entirely to organic production. “We are doing this for our children’s health. Vegetables grown without pesticides can be eaten straight after harvesting,” according to four female members of the Groupement d’Intérêt Économique (Economic Interest Group/GIE) Book Xalat in Keur Matar. In Manko Pout, which is 60 kilometres from Dakar, Tsai Dieye grows vegetables on 100 hectares. She is also aiming to go 100% organic because she wants to regenerate her land, plus she believes it is ultimately better for plant health. 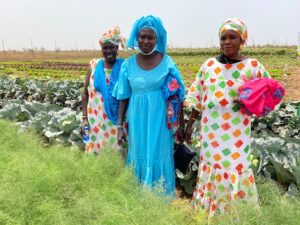 Awa Gueye, Mama Awa Diop, Mama Coumba Gamba Gueye and Khady Gueye are all members of GIE Book Xalat, which has 70 members in total. When asked about their approach, they explain: “We grow all kinds of vegetables ─ cabbages, onions, tomatoes, potatoes, herbs, peppers and aubergines. We have been farming organically for several years, mainly for the sake of our own health and that of our children. It is the best approach, as we use no chemicals at all. Conventionally grown vegetables contain many pesticide residues, but our produce can be eaten immediately after harvesting.”

Field days
It is far from easy to grow vegetables in a country located in the transitional area between desert and savannah. The main problem is a lack of water, followed by pests and diseases. There is also a shortage of good-quality seeds. “Last week we attended field days organised by Agroseed, Rijk Zwaan’s distributor in Senegal. We’re very enthusiastic about the quality of the crops, so we will use them for our next cycle.”

Marketing and processing vegetables
GIE Book Xalat sells produce on the local market. “We have noticed rising demand for organic vegetables. Our group is very well-known locally and everyone knows that we grow our crops organically. We would like to sell our vegetables in Dakar, but we don’t have the capacity to do so yet.” Another thing these growers want to learn is how to process their vegetables for better conservation and added value.. “If we have a surplus, we would like to make pasta sauce, for example. We still have a great deal to learn about both cultivating and processing our vegetables.”

Exchanging ideas with other growers
Likewise Tsai Dieye, who is based in Manko Pout, is keen to acquire and exchange knowledge. She runs her business, La Melonniere, together with her husband. Dieye is responsible for growing, while her husband takes care of sales and finance. The company has 40 employees and comprises 100 hectares, including 2 hectares of tunnels. “We have been growing melons, tomatoes, blocky peppers, habaneros, cabbages and cucumbers for the past 15 years. I would love to exchange ideas with other growers in Senegal, especially about organic production.”

Using natural enemies
Dieye started transitioning to regenerative agriculture two years ago. “After 15 years of successful conventional farming, we started noticing that we needed to increase the amount of fertilisers and pesticides, but yields continued dropping. There seemed to be no end in sight. I lost an entire harvest of tomatoes to Tuta absoluta (tomato leaf miner). Then I started using Nesidiocorus tenuis, a natural enemy of Tuta absoluta. To keep the Nesidiocorus alive, we had to stop using certain pesticides – and that led to less of a pest problem in general rather than more, which was very surprising. My first goal now is to regenerate the soil, which will lead to better plant health. I’ve already stopped using pesticides. My next goal is to gradually decrease the use of synthetic fertiliser and end up being 100% organic.”

Trials with new varieties
Dieye needs strong varieties if she is to grow organic produce successfully, so she collaborates closely with Agroseed. “I’m already using varieties from Rijk Zwaan to grow tomatoes, peppers, habaneros and cucumbers. I’m also conducting a lot of trials using new seeds. Agroseed’s consultant visits us to see how the crops are coming along and follows up the trials carefully. I really appreciate that support.”

Own stickers on melons
La Melonniere sells its produce on the local market in Dakar. “I can’t really say how the market for organic produce is developing; it’s mainly wealthier people who will probably be willing to pay a premium for it,” she explains. “I’ve noticed that our produce is highly valued. We developed our own branded stickers for our melons and it worked very well because it was associated with intense fruit quality. Customers would say, ‘I know they are sweet and tasty, I want them.’ I’m not sure that we can have the same success for produce just because it’s organic. It will also have to be of superior organoleptic quality for it to win over our customers. Being organic will be the icing on the cake.”