In May 2022, a new campaign is being launched to encourage consumers in the Netherlands, Flanders, Finland and Sweden to buy more organic products. It is based on collaboration between supermarkets and other value chain partners including Rijk Zwaan. “We want to awaken the conscience of concerned citizens inside supermarkets, and we will use nudging to help us,” says Michaël Wilde, Director of Bionext, the Dutch branch organisation for the organic food and farming sector.

Organic production is in favour among European policymakers. In its Green Deal, the European Union (EU) has expressed its ambition to make the continent climate-neutral by 2050. For the European food sector, this goal has been translated into the Farm-to-Fork strategy. “One of the targets is for 25% of farming to be organic by 2030,” says Wilde.

A magic door
The EU has set this target because organic production contributes to more biodiversity, a better climate, clean water and healthier soil. “Consumers and retailers alike are increasingly aware of these advantages of organic farming, and yet the consumption of organic products is still low. It’s as if concerned citizens step through a magic door when they enter a supermarket which transforms them into critical consumers who are mainly focused on price and convenience. We want to awaken the conscience of those concerned citizens in stores.” 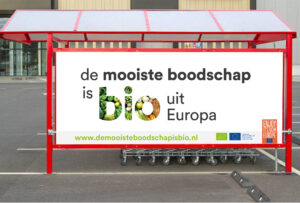 Three-year campaign in partnership with supermarkets
With this in mind, Bionext has worked with colleagues in Finland, Sweden and Flanders to develop a plan. Wilde: “We want to make Europeans enthusiastic about organic products and we’re using nudging to help us. That means using positive triggers which encourage consumers to choose more organic products. We have received EU funding for the campaign and we will be rolling it out together with grocery retailers over the next three years. We have good contact with four major supermarket chains in the Netherlands who have the ambition to grow in organic products. The campaign is a nice fit with that.”

Encouraging consumers to opt for organic
The Dutch campaign started in May 2022, explains Wilde. “In the Netherlands, we want to test one of the six categories with a specific supermarket chain every six months. Throughout that period, we will use both online and offline nudges to see which work and which don’t when it comes to encouraging consumers to buy more organic products. For example, an online shopper might be asked ‘Do you want to upgrade your fruit and vegetables to organic?’. In stores, a shopper using the self-scanner might see a message saying ‘For an extra 20 cents per kilo, you can buy organic potatoes.’ Even a sign above the fresh produce display listing the five best-selling organic vegetables can nudge people in the right direction. We’re making these choices in conjunction with a marketing agency and the retailers.” 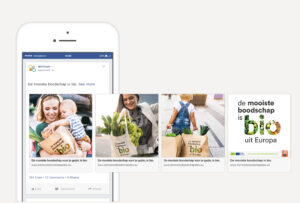 Involving value chain partners
Supermarkets are not the only ones who will be supporting the campaign. Bionext is looking for value chain partners who are willing to get involved for six different categories in the Netherlands, and the colleagues in Finland, Sweden and Flanders are doing the same in their own countries. “Rijk Zwaan has signed up for the fruit, vegetables and potatoes category, and other companies from the fruit and vegetable sector have also expressed an interest. Partners can submit products for testing – which in Rijk Zwaan’s case could be a particular lettuce or tomato, for example,” says the Bionext director.

Knowledge across six categories and four countries
For partners, the biggest advantage is they that gain priority access to the knowledge that is generated by this campaign, explains Wilde: “We will be gathering data across six categories and four countries. That knowledge can come in useful for a partner like Rijk Zwaan in its discussions with customers to help reinforce its position in the value chain. Participation in this campaign also strengthens the image of the partners as companies that are investing in organic farming.”

Interested?
To find out more about the campaign, feel free to contact Bionext: info@bionext.nl.
For the Dutch campaign, check www.demooisteboodschapisbio.nl